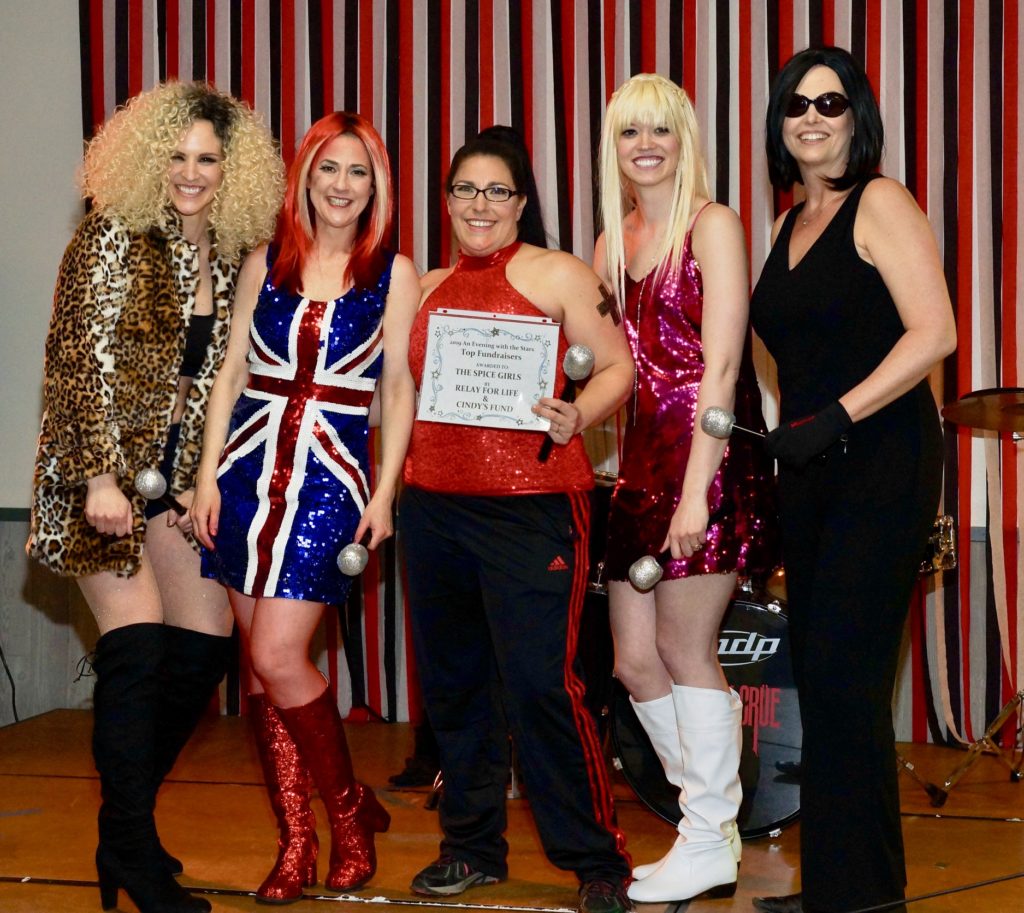 Lip-syncing to the Spice Girls song “Wannabe,” Doctors Becky Crowell, Abigail Feathers, Marjorie Fridkin, Lynda Dougherty and Stephanie Sisler  received “Judges’ Choice” and “Top Fundraiser” for the Cindy’s Fund lip-synch benefit, “An Evening with the Stars.” Through overwhelming community support, the Cindy’s Fund benefit had its most successful year ever with the team of physicians contributing $20,698 in donations.

This year marked the seventh annual “Evening with the Stars” lip-synch benefit that raises money for Cindy’s Fund and the American Cancer Society. Held at the Oakland Elks Lodge, the event typically sells out each spring and averages ten different performance groups each year.   The teams raise funds in advance of the event, and they put in many hours of practice and preparation in the months leading up to the performance to compete for the top prizes of “Top Fundraiser,” “Judges’ Choice” and “Crowd Favorite.”

“For the last few years, Dr. Fridkin and I would attend the event and say to each other, ‘we could totally do this’ and we decided no more excuses, 2019 will be our year to compete. We rallied Doctors Crowell, Dougherty and Sisler and soon the Spice Girls were born,” said Abigail Feathers, MD.

“Coordinating schedules for five doctors was quite challenging, but we rarely ever missed a practice in the six weeks leading up to the event.  Sometimes we’d be rehearsing and one of us would get called in for surgery or to go deliver a baby.”

Each of the five doctors who became the Spice Girls are affiliated with Garrett Regional Medical Center and practice in Oakland, Md.  Dr. Abigail Feathers, who filled the shoes of Scary Spice, is a gynecological surgeon and practices at Specialty Physicians of Garrett County.  Playing the part of Ginger Spice, Dr. Marjorie Fridkin is GRMC’s Chief Medical Officer as well as a general surgeon and medical director of the hospital’s wound care center.  Colorectal surgeon Dr. Lynda Dougherty performed as “Posh Spice” and has her own practice, Deep Creek Colon & Rectal Surgery.   Sporting the role of “Sporty Spice” was Dr. Becky Crowell, who a family medicine physician at Cornerstone Family Medicine.   Rounding out the group was Dr. Stephanie Sisler, aka “Baby Spice,” who is a pediatrician with her own practice, Lovelight Pediatrics.

“As a surgeon, I am part of the diagnosis, surgical treatment, and aftercare for patients with cancer who are treated at Garrett Regional Medical Center,” said Dr. Marjorie Fridkin, GRMC Chief Medical Officer.   “Cindy’s Fund helps my patients throughout all of their cancer experience. The support they provide is critical to my patients being able to concentrate on getting better. I was thrilled to be able to participate in raising funds for such an important community organization.”

Cindy’s Fund is a local nonprofit that provides financial assistance to Garrett County citizens who have been diagnosed with cancer.   Proceeds from Cindy’s Fund covers miscellaneous expenses not covered by insurance and may include gas cards for transportation costs, hotel stays, and nutritional supplies.

“This experience was so much fun and we feel like we got a chance to make an impact in our community,” Dr. Fridkin concluded. “We can’t wait for next year!”