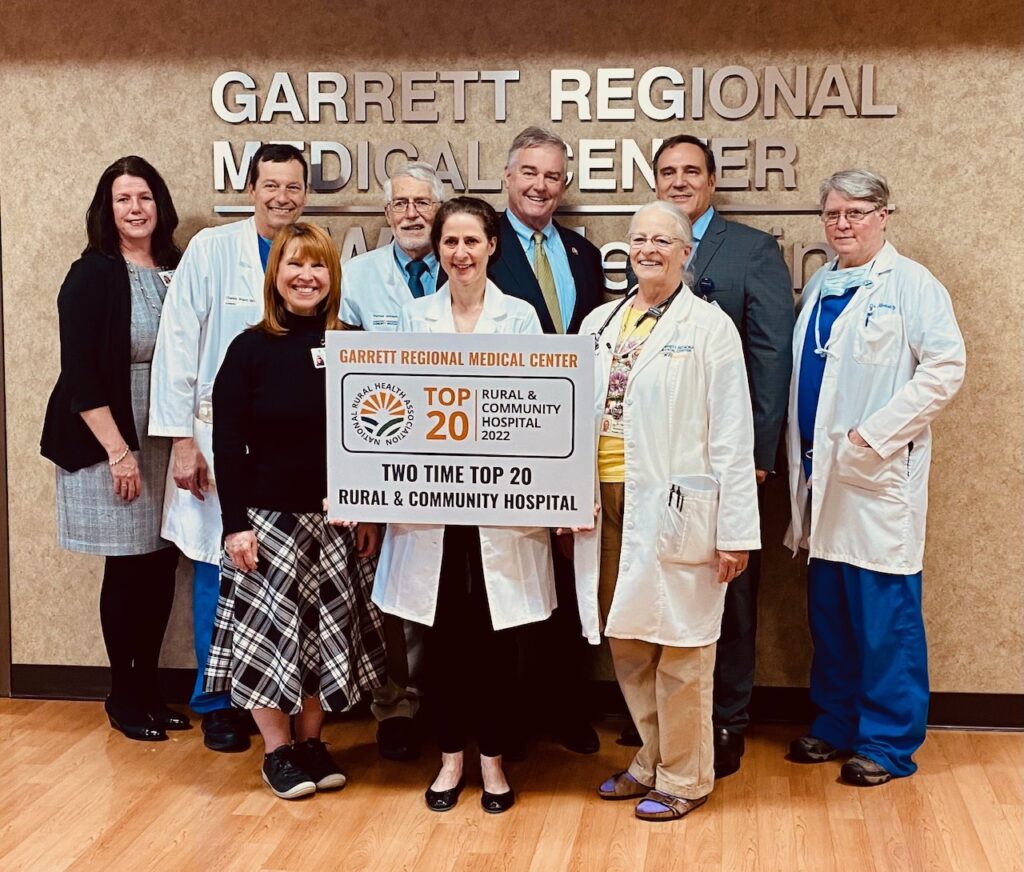 Congressman David Trone and Garrett Regional Medical Center (GRMC) Chief Executive Officer Mark Boucot met this week at the acute care hospital in Garrett County to discuss the challenges facing health care providers in rural areas and to congratulate the hospital administration and medical staff for being named a Top 20 Rural and Community Hospital by the National Rural Health Association for the second year in a row.

Congressman Trone stopped by the hospital to touch base with Mr. Boucot about a variety of issues, including COVID’s impact on rural providers as well as the impact of the relentless opioid epidemic on the nation’s rural communities.

“Congressman Trone is a great supporter of the hospital in helping to support grants that we’ve received for services ranging from cancer care to behavioral health medicine and addictions treatment services,” stated Mr. Boucot.  “It was through federal HRSA funding that the hospital began programs to care for patients with addictions, cancer care, and pain management issues.”

During the meeting, the Congressman met with members of the hospital’s medical staff, including Kelly Rock, DNP, PMHNP-BC, the Psychiatric Nurse Practitioner who oversees GRMC’s Medication Assisted Treatment (MAT) program at the behavioral health clinic. The program combines prescriptions for buprenorphine with counseling and behavioral therapies to provide an effective mode of treatment for Opioid Use Disorder, which can be particularly difficult to treat without medical intervention. The Congressman is known for his efforts to address the addiction issues that plague American society.

“Our rural communities are experiencing overdose fatalities and mental health crises at alarming rates. Folks need accessible, affordable health care, and I believe the programs in place at Garrett Regional Medical Center can serve as a blueprint for other centers across the country,” said Rep. Trone. “The efforts of the medical team here meet the moment to address the needs of those in Garrett County. If the last two years have taught us anything, it’s that our healthcare heroes deserve the funding, resources, and staff to help save lives. In Congress, I won’t stop fighting to deliver just that.”

In addition to discussing the services provided by GRMC, Mr. Boucot also shared statistics that make GRMC as one of the best rural hospitals in the country. The hospital has had the lowest readmission rate in the state of Maryland for the last four years, and has had one of the consistently best scores for reducing patient complications and hospital acquired conditions in the state for the last four years.  The hospital also has an excellent track record for preventing surgical site infections.  The Congressman was impressed with the fact that GRMC has not had a catheter associated urinary tract infection in over five years, nor has it had a central line blood stream infection for the last seven years.  The hospital has also not had a c-site infection in over five years.

“The fact that the hospital has such a great quality record is due to the hard work and dedication of the staff,” stated Mr. Boucot. “I’m honored to lead the hospital team here, but the credit for our success really belongs to them and to the great medical staff we have.”